Took a bit of a break from the blog as I picked up a stomach bug and been under the weather, ugh. We had a delightful Christmas Eve dinner with Helena and her godson, Philip, along with his parents, Anne and Patrick. It was a lovely time but, unfortunately a bug got the better of four of us. Charlie and Philip seem fine so far. Let’s hope it stays that way. 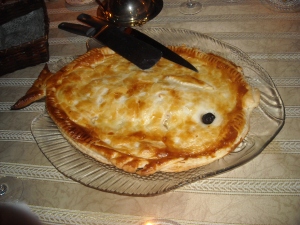 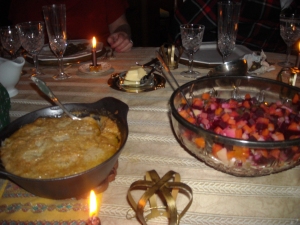 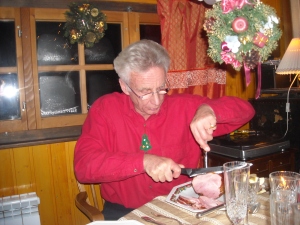 I can just now talk about the food we enjoyed…oysters on the half shell, salmon pie, foie gras, ham, a mashed root (kind of like turnip but not) and a bowl of chopped up carrots, beets and other things I’m not sure of. All of this was accompanied by champagne, bordeaux, chablis, more champagne and glog. The lovely Anne brought a trifle for dessert along with a special Christmas cookie that I can’t remember the name of. Helena is from Finland and included Finnish dishes in her menu.

The conversation was varied…they knew much more about the U.S. than we do of Switzerland…heck, they probably know more about the U.S. than we do. They had an interesting take on our country’s politics and we learned a lot about theirs. Anne was surprised that we were even interested in European politics. I think she thinks our idea of them is that they are all a bunch of “socialists”. Gee, I wonder where she gets that idea. They figured out that we were all on the same page in that department and so the conversation remained very civil. Traveling Europe makes one so much more aware that we might not be the smartest country on the planet. 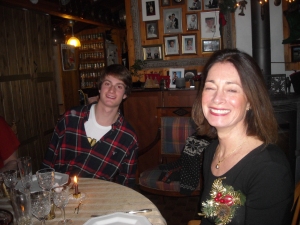 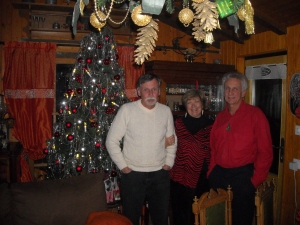 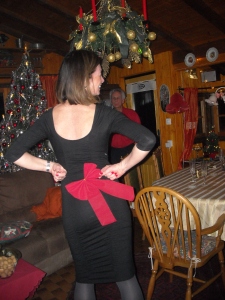 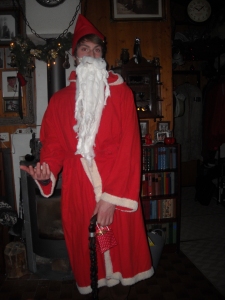 After dinner we had a special surprise of a visit from Santa Claus (Philip mysteriously disappeared.) We were even included in the gift giving. Somehow Santa knew we would be there and I received a box of champagne truffles while Charlie was given a can of pate…both of which were apperciated and will be tasted when my appetite returns. At the moment I’m only consuming broth and water. Not a fun way to lose weight!

The Montezuma’s revenge didn’t hit til the day after Christmas so Charlie and I roasted a small turkey breast and skyped Jess and Ali soon after the boys had opened their Christmas gifts. They were all a bit preoccupied and Jess was fixing breakfast so we weren’t on the call long, but it was great to see all the happy faces. Later we skyped Patty and got to see mom and dad and the rest of Patty’s family. Dad was quite confused through it all but looked happy so that’s what counts. We were able to pan the camera over Lake Geneva and the Alps so they could get the gist of what our living arrangements are like high in the mountains. Patty mentioned that she didn’t realize we were so close to Lake Geneva…close but so far away…as it takes us about 30 minutes to get down there through winding roads and tiny villages.

We hoped to go to Lausanne yesterday but it wasn’t in the cards…hated to waste a beautiful day. Today is cold and rainy…not cold enough for snow though. Planning on going out some tomorrow, that is if this nasty bug doesn’t catch up with Charlie.

Hoping everyone enjoyed a wonderful Christmas and looking forward to a fun New Year. We’ll be off to Paris on Sunday…