After two days of rest and relaxation, chilling in Ruediger’s house and exploring Zirndorf, we headed to Berlin early Friday morning, as in 6:15 a.m. When we finally got to Nuremburg, we hopped on an ICE directly to Berlin and arrived around noon. Enjoyed our coffee on the train, while watching the countryside speed by at 180 kilometers per hour.

Charlie found a walking tour on Tripadvisor.com which is how we spent the next several hours upon arrival to Berlin. Lunch on the river Spree, more beer, of course, then started our trek past ancient museums, sculptures and cathedrals, making our way finally to the Brandenburger Gate. Difficult to imagine that a few short decades ago this city was split in two. You’d never know now with the hoards of people bustling on both sides of the gate. 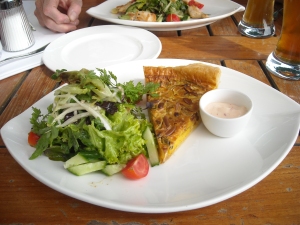 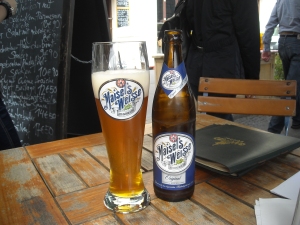 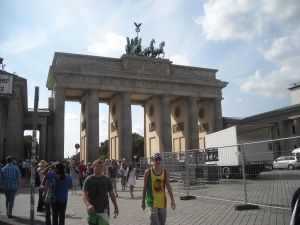 The Memorial to the Murdered Jews in Europe for those who died in the Holocaust was amazing…so simple but so awe-inspiring, 2,711 slabs or pillars of concrete, in all sizes, representing each page of the Talmud. People wandered among them as if in a maze of remembrance for all those who were lost in another era not too long ago.

Went to snap a hot air balloon when this enthusiastic girl popped into the picture.

Across from the memorial park was the Tiergarten which was the main focus of the book In the Garden of Beasts, by Erik Larsen, one of my favorites. Didn’t have time to locate the house from which the stories were told, but one could imagine the events that took place here in the 1930’s leading to Hitler’s terrible reign.

Berlin feels like it’s in a different country from the Bavarian section of Germany, being a large, crowded city loaded with tourists. Interesting, though, that we still have not heard an English speaking American in Germany.

Now to board a crowded train to Hanover for our trip back to Zirndorf. Hoping the crowds subside on the longest leg of our journey back. Yikes, they didn’t! On the 2 hour trip to Hanover, the train was crowded and hot. Managed to get a seat but it wasn’t pleasant. It was the first time we had a not so good experience on the DB. Once in Hanover, however, we were able to hop on an ICE and travel in comfort. Good thing as we had another 3 hours to go to Zirndorf.