Traveling to London was a daylong affair since we chose to fly out of Frankfurt-Hahn airport, which houses Ryanair, the cheapy airline of Europe (and we found out why…later). It takes a few hours on 3 trains, then a couple of hours on a bus to get there. Tiny airport and first come, first seated…one can always pay a few more Euros for priority seating but didn’t see the need so just got in line and duked it out, so to speak. Then they guide us out to the tarmac where we climb on board, front or rear. We’re so spoiled at OIA. Something triggered the scanner which led to Charlie being wanded and me being wanded and pat down. And, yes, it was a thorough pat-down but anything worth complaining about? No! It’s their job and I don’t care if I look like the furthest thing from a terrorist, I don’t mind it for my safety and everyone else’s. That was for you, Jack, end of TSA soapbox. So once on board it’s only an hour’s flight but they try to sell you everything from water to smokeless cigarettes, to handbags and perfume. Flying over the English Channel we saw dozens of wind turbines…can you imagine the power that could be generated off New Smyrna Beach? I vote no for oil drilling and yes for wind turbines off the coast.

Arriving at Stanstet Airport outside of London we borded a minibus and headed into the city where we were dropped off on Baker Street and bussed to Trafalgar Square. Northumberland Street was just off the square and our quarters for the next two nights were just down the street. These college kids have it made here, beautiful historic building in the heart of London and just steps from the Thames, Hungerford Bridge and The Eye. We opted for Sherlock Holmes’ restaurant, across the street as we were tired and hungry and not in the mood to search out something else. We think this is a chain but it fit the bill with comfort food and drink, walked down to the river and saw the lights, then off to bed. Our room was typical dorm fare with the tiniest bathroom I’ve ever seen, but it housed a toilet, sink and shower, which was all we needed. Checked out some Olympic coverage in the common room downstairs before hitting the sack. Why is traveling so exhausting when most of the time you’re just sitting there?

The London School of Economics and Political Science, our home for 2 nights 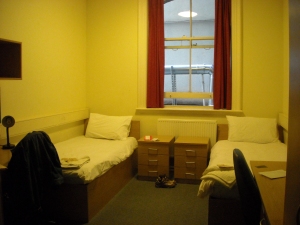 Next morning grabbed breakfast and found a spot along the race barricade in front of our lodging. The crowds didn’t start forming til around an hour before the start of the race, 11 a.m. Everyone around us was chatty. In addition to the Irish guy mentioned before, on our other side was a photographer from Holland who spoke great English and we had a jolly time with him. (Yes, I’m beginning to speak with an English accent…I’m sure the German accent will return when we get back to Deutchland). The race itself was just too cool. The runners made a total of 4 passes in front of us, the start of the race was only about 1/4 mile away so they were in a bunched-up group the first time, but by the third passing (11 miles) they were spread out and one of the American runners dropped out in front of us – hamstring issues. The crowd cheered every last runner as if he were the first…and there were some stragglers…the last one with a huge grin on his face until the last lap when he looked totally whipped.  We really thought the Kenyans would be 1 and 2 but the Ugandan just kept up and surpassed them in the end. Such a shamethat the last American standing came in fourth. But he said he was just glad he was fourth in the world. 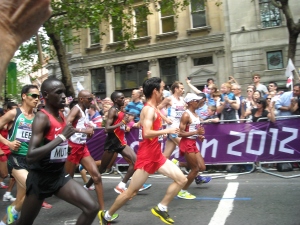 Crowd management was handled beautifully and cheerfully. It was a difficult run with all the twists and turns and by the time it was over I felt like I’d run it myself…we were exhausted but walked the distance from Hungerford Bridge to the Tower Bridge which was an awesome sight. The Thames was so busy with boat traffic, lots of barges and definitely not a place to take a dip. Actually kind of gross on the river bed.

This guy’s sunbathing on the banks of the Thames (yuk) with a microphone, singing while playing the guitar. London’s answer to NYC’s naked cowboy? 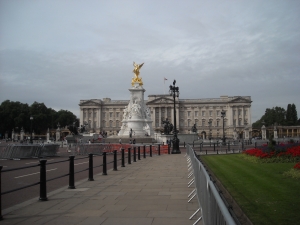 London as a whole was a bit dirty. Comparing it to NYC, I’d choose NY. Granted we didn’t have time to visit all the museums, other than walk by them, but London just didn’t ring my bell. Perhaps, if we had more time to explore we’d appreciate the city more. We were ready to return to Germany. More later…