On our way to Paris, flying out of Geneva…it was a bit disconcerting that no one asked us for our passport or an ID of any kind on the flights from Geneva to Paris and Paris to Geneva…we printed out our boarding pass at a kiosk in the airport, where all we needed was our eticket number. All we had to show at the security checkpoints were our boarding passes. Interesting, too, that on Air France there are no announcements about “turning off all electronics.” On the take-off and landing those around us were tapping away on their devices.

Upon arrival at Charles De Gaul airport in Paris, there are Roissey bus stations easily available which, for 10 Euros, take you to the middle of the city at the Opera House, where there are several Metro stations ready to whisk you away to your hotel. 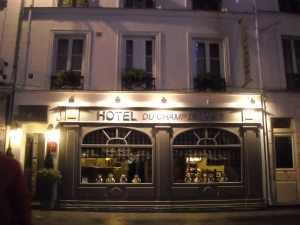 The “lift” only has room for 2, along with an ashtray in case you want to smoke up the joint (a relic from the old days).

Hotel Champ de Mars proved to be a good choice, thank you Rick Steves and TripAdvisor. It’s in the Rue Cler area, full of cafes, shops and just a short walk to the Eiffel Tower, which was visible from our room. Tiny accommodations but very clean and updated, comfortable. Very affable reception desk with only one complaint…the doggy bed was empty the entire three days. Apparently, when the owner/operators are present, they bring their puppy, who resides under a window.

After walking the city each day, we would collapse in our room and actually enjoy watching tv, since we are without it in Switzerland. We found a couple of stations running old American movies, in English., not to mention CNN, not that we wanted to watch that…good to get away from cable news.

The Eiffel Tower was awesome but the holiday crowds were too large to try to go for the top, and reservations were not available for a full week. Very disappointed that there were no fireworks or even light show on New Year’s Eve…we didn’t get the memo that fireworks have been canceled…not even a light show this year.

The first night there we had skipped lunch so were too hungry to shop around much for a good restaurant and chose the first one which printed their menu in French and English. We ordered steak and fries (yes, “French” fries) at a cafe around the corner – Charlie called it a “mis-steak” – we should have gone for something more French. 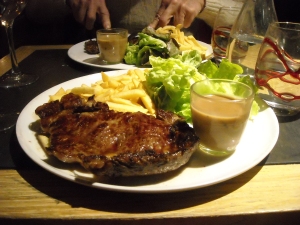 Next day, after a breakfast of croissant, orange juice and coffee, walked to the Champs Elysee at the Arc d’Triumph and all the way to the Louvre, passing through a huge market full of food shops, souvenirs and hand-made items. Once at the Louvre there was no chance at getting in, because of the crowds, but the architecture was awesome and just standing in the courtyard was impressive. It would take days to get through it, even if we could get in…would require a much longer visit. 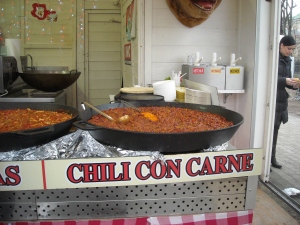 From The Louvre we walked to the Notre Dame cathedral, which is celebrating its 850 year – again, impossible to get in but awesome architecture. The whole world must be visiting Paris this holiday! By this time we had lost track of how many miles we had covered and took Metro back to hotel. We have found that every big city just takes a little time to figure out the mass transit systems. Once you get past your initial feelings of inadequacy, you figure out the color coding and, voila, it’s an easy system. 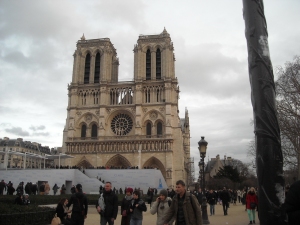 Most of the nicer French restaurants were only open for a price fixe holiday meal, since it was New Year’s Eve, but found a local place, Tina Pizza, where we had osso bucco milanese…yummy but not as good as The Garlic back home. Pleasant people and good price, though. 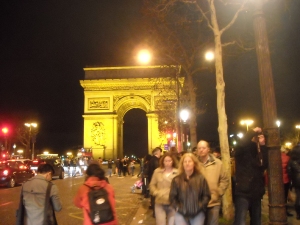 Since I wanted to see the Champs Elysee lit up at night, we made our way to the Arc d’Triumph, which obviously was the place to be at midnight and the party had already started with thousands milling about. There was a major police presence, some with crazy uniforms and packing crazy weapons. The lights were gorgeous and the ambience reminded us of Times Square.

But, since we are old fogies we weren’t up for staying out til midnight and it was getting really cold, so we rode back to the hotel, learning that the metro was free after 5 pm as it was the official start of the holiday…stayed free til noon on Jan 1. So, we stayed awake til midnight and opened up the window, stuck our heads out and listened to people counting down, watching the top of the tower sparkle at midnight. Amazing we even stayed awake after trudging all over the city all day.

Next morning we found our way to the Galerie Lafayette, which is similar to our NYC Bloomingdale’s or Sax Fifth Ave., to see the awesome holiday windows. I have to say they rivaled NYC. Lots of animation and gorgeous colors. Would have loved to check out the stores but they were all closed for the day. Nature was calling so bravely tried one of the automated bathrooms, for which Paris is known. After each person completes his mission, steps out and closes the door, it self washes and disinfects. Seems to work because there was no odor and everything seemed freshly clean…and free.

Saw the Bastille Center, the Place des Vosges (home to Victor Hugo for a time) and the Rue de Rivoli and the Cathedral of Saints Paul and Louis, which was beautiful and overwhelming. Our last meal in Paris was at a cafe in the area called Sant Antonio, where I had the best eggplant parm ever and Charlie enjoyed a pizza (which are very popular over here)…and trading beer, wine and diet coke for the water “with gas”.

Now it’s time to head back to the hotel and meet the driver who will take us back to the airport for our departure to Geneva. Seeing Paris in just two and a half days is not recommended as there is just too much to see and one should spend time to savor the history and beauty of it all. Au revoir, gay Paree!