The next leg of our Canadian journey would take us to Toronto via bus and train. The transportation center was just a half mile walk from the Niagara Falls Doubletree, which we gingerly took through snow which had accumulated that morning. The cost of our two-hour trip was only eight dollars and change as we were once again reminded that we are “seniors” and qualified for a hefty discount. From Niagara Falls we disembarked at Burlington and boarded a train headed for Union Station in Toronto.

The train ride took us through some seedy areas, which was a surprise as we were accustomed to the rails of Europe traveling through gorgeous countryside and beautiful neighborhoods. Arriving in Union Station we opted to walk fifteen minutes to the Hyatt Regency while struggling with a suitcase whose wheels have seen better days. Time to shop for new luggage! Check-in at the Hyatt was quick. I read somewhere to ask for a room facing the CN Tower and we were instantly upgraded (even though we had booked through Priceline) to a room with a view on the 17th floor. The only complaint here, once again, was the lack of WiFi. I’ll never understand why an upscale, 4-star hotel will charge $15 a day to go online. Of course, we could opt to use our laptop and Kindle in the lobby for free access, but what a pain in the rear that is! Not to mention it didn’t work half the time and we were forced to go to the adjacent Starbucks for coverage. Other than that inconvenience, our stay was just fine and the location was perfect with many restaurant choices within two blocks. 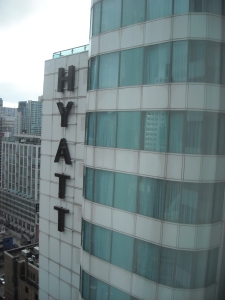 Our first night’s entertainment was a show at The Second City, which was right across the street…The Meme-ing of Life, by an ensemble of talented comedians/singers/actors. Look out for Stacey McGunnigle, the whole cast was super but she really stood out and had us wishing she was in every sketch. We would recommend a night at Second City if you are in town looking for a laugh. Instead of purchasing tickets from the box office, we checked the T.O.TIX booth at Dundas Square for discounts. This is Toronto’s version of TKTS in NYC. Second City tickets were almost half price for that night’s performance so we grabbed them. The venue was full that night so not sure why we got such a deal. The only gripe was the watered down drinks…do not order a Zombie, you’ll just get a glass of fruit juice (and don’t ask me why we ordered Zombie’s, they just sounded good).

The next day we opted to travel up the CN Tower, over 1,800 feet tall and the 5th tallest in the world. For decades it was number one but has been surpassed by Dubai, among others. Our ears popped as we rose to the observation area and the view was phenomenal; the clear, sunny day insured optimal views of Lake Ontario and the city of Toronto. Charlie agreed to join me but wouldn’t stand on the glass floor. Of course, the little girl who was jumping up and down on it didn’t help. Our 20-floor hotel was dwarfed by this giant structure…a must see when visiting Toronto.

We lucked into “same day” tickets to the theatrical production of Wizard of Oz at the Ed Mirvish Theatre, and, even though our seats were not together, they were only seven and twelve rows from the stage. For only $35 a ticket, we were entertained by Andrew Lloyd Webber’s huge staging of the familiar story of Dorothy and her cohorts with seating that would normally sell for over $250. It always helps to be flexible and spontaneous when trying to score drastically discounted theater tickets. 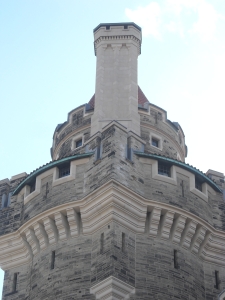 The next day the temperature had dropped even further, with a dusting of snow so we took advantage of Toronto’s PATH underground walking system which is made up of eighteen miles of underground shopping and restaurants, connecting various transportation centers and more than 50 buildings and office towers. It’s a bit confusing to navigate to your destination but such a relief from the cold temps above ground. We also took advantage of a Groupon deal to ride the Jump On-Jump Off city tourist buses. They took us to Casa Loma, the only castle in town, and the Distillery area which houses the Old Town section of the city. The enthusiastic tour guides added many interesting and little-known facts about the sophisticated, yet friendly Canadian metropolis. 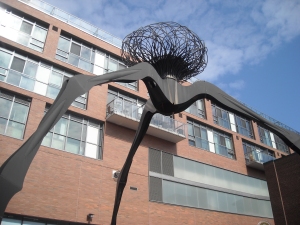 We became great fans of the Tim Horton’s franchises, which started as donut and coffee shops and have since expanded to bagels, healthy soups and sandwiches, and, of course, coffee. Their fast food prices drew us in many times when we needed a respite from the cold. We learned of the feud between Horton’s and Starbucks over who has the best coffee. Walking the streets it seemed that we ran into one or the other on every block in town, so there is no shortage of java to get you through your day.

Heading back to the Niagara Falls International Airport on our final day, we retraced our steps and rode the train to Birmingham, transferring to the bus which led us back to Niagara Falls. The walk back to the Rainbow Bridge was a bit brutal as the wind chill factor made the air feel frigid. We stopped at yet another Tim Horton’s to warm up and spend our last few Canadian dollars before the trek back to the U.S. border. We thought we had plenty of time before our scheduled flight so there was no sense of urgency to keep moving.

Once we got through customs I searched for the bus schedule and realized I had misplaced it so we were on our own, looking for the bus stop at which we arrived the previous week. Of course, it was a Saturday and the schedules were different. Again, never make assumptions that the bus would just reverse its previous route and show up eventually. After a frantic call to our daughter to check the schedule online, we found the bus would arrive on the next block but the times were sketchy. After standing in below-thirty degrees for almost an hour, we panicked and realized we needed to grab a taxi if we were going to get to our flight on time. We were standing in front of a large casino so it was not difficult to find a cab. When we told our turbaned driver that our flight was leaving in 35 minutes, he flew onto the expressway and got us there with fifteen minutes to spare. Since IAG is such a tiny airport, ours was the only plane visible and the Allegiant desk was just inside the front door. We checked our bag, under the justified disapproving looks of the gate personnel, dashed through security and were in our seats within 5 minutes. Do not try this at home if you have a heart problem!

I don’t think we actually thawed out until we stepped out of the Sanford airport into the warm, humid air. We have had our fill of cold temperatures and might not curse our summer heat this year, but I’m not making any promises. Actually, we heard from some Canadians that their summers can be extremely hot, too, with Lake Ontario providing uncomfortable humidity levels, but I’ll never believe they are as miserable as we are in August and September.

Our overall impression of Niagara and Toronto is positive. The Falls are a must see for anyone who appreciates the wonders of nature and the city was welcoming, cosmopolitan and gave us yet another window into a culture other than our own. As the recently departed Roger Ebert would state…two thumbs up! 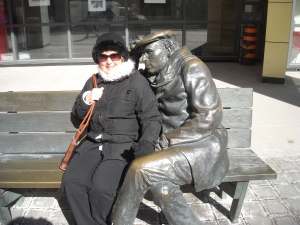 3 responses to “Too Cold Toronto”